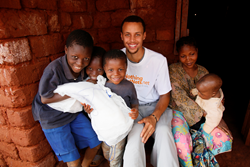 Stephen Curry in Tanzania with Nothing But Nets

“As a father, I can’t imagine a world where kids are still dying unnecessarily from a preventable disease like malaria,” said Curry. “With my partners at Under Armour, we’re releasing this special colorway of the Curry 4 so that fans can be part of the solution with me.”

On December 31, Under Armour and Stephen Curry, who serves as the Global Ambassador for the United Nations Foundation’s Nothing But Nets campaign, will release a limited-edition Curry 4 Low colorway to support the fight against malaria. For every pair sold, Stephen will donate an insecticide-treated bed net to Nothing But Nets, protecting kids, refugees, and families from malaria.

Stephen wore the new colorway, aptly named “Nothing But Nets,” as he worked out before last night’s game against the Utah Jazz. The bright red colorway with netting design found on the heel is inspired by his involvement in the campaign’s efforts to send nets and help save lives from malaria.

“As a father, I can’t imagine a world where kids are still dying unnecessarily from a preventable disease like malaria,” said Curry. “With my partners at Under Armour, we’re releasing this special colorway of the Curry 4 so that fans can be part of the solution with me.”

First learning about malaria while at Davidson College, Stephen has supported the Nothing But Nets campaign for many years and conducted his own Three for Three Challenge for the past five NBA seasons, donating three bed nets for every three-pointer he makes.

In 2013, Stephen traveled with Nothing But Nets to Nyarugusu Refugee Camp in Tanzania, operated by Nothing But Nets partner UNHCR. Nyarugusu is one of the largest refugee camps in the world and malaria is the leading cause of illness and death. There, he helped deliver more than 38,000 bed nets to refugees and hung nets in a few homes. Since 2006, Nothing But Nets has raised more than $65 million dollars and delivered more than 12 million bed nets and other life-saving malaria prevention and treatment to families in 31 countries.

“We have made tremendous progress in the fight against malaria, but the fact remains that a child dies every two minutes from this disease,” said Margaret Reilly McDonnell, executive director of Nothing But Nets. “Stephen understands how something as simple as a net – or in this case a net per shoe – can help us save lives. We are so proud to have him and Under Armour on our team to defeat malaria.”

The Curry 4 Low “Nothing But Nets” colorway will release for $120 USD at Under Armour Brand Houses and UA.com in the United States, Canada, and China on December 31. Each shoe purchased delivers a life-saving anti-malaria bed net and educates the recipient on its proper use.

To learn how you can join Stephen Curry and Under Armour to support Nothing But Nets to save lives and help defeat malaria, visit http://www.NothingButNets.net/Steph.

Ryland Devero
Nothing But Nets
rdevero(at)unfoundation(dot)org
214.854.2350

About Nothing But Nets
Nothing But Nets is the world’s largest grassroots campaign to save lives by preventing malaria, a disease which claims the life of a child every two minutes. Inspired by sports columnist Rick Reilly, hundreds of thousands of people have joined the campaign that was created by the United Nations Foundation in 2006. Nothing But Nets has raised over $65 million to help deliver 12 million bed nets to families in need, along with other crucial malaria interventions. In addition to raising funds for its UN partners, Nothing But Nets raises awareness and voices to advocate for critical malaria funding for the U.S. President’s Malaria Initiative and The Global Fund to Fight AIDS, Tuberculosis and Malaria. It only costs $10 to help save lives from this deadly disease. Visit http://www.NothingButNets.net to defeat malaria.

About The United Nations Foundation
The United Nations Foundation builds public-private partnerships to address the world’s most pressing problems, and broadens support for the United Nations through advocacy and public outreach. Through innovative campaigns and initiatives, the Foundation connects people, ideas, and resources to help the UN solve global problems. The Foundation was created in 1998 as a U.S. public charity by entrepreneur and philanthropist Ted Turner and now is supported by global corporations, foundations, governments, and individuals. For more information, visit http://www.unfoundation.org.

During Pandemic Plexus Worldwide Continues to Focus on Philanthropic Efforts with...

L7 Defense Awarded the 2020 Global Product Leadership Award for Its...