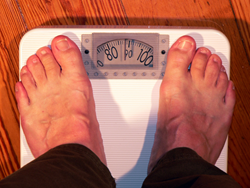 The number we see on a scale and our health are closely related.

The really difficult problem is how to help people with severe obesity not only lose their weight, but also to keep it off over the long term.

A December 5 article on Time reports on a paper published in the UK medical journal, the Lancet, which showed that weight loss alone coincided with type 2 diabetes remissions in nearly half of a group of test subjects who had been able to lose 33 pounds or more. Los Angeles area weight loss surgery clinic Dr. Feiz & Associates notes that, while the study finds further proof of the importance of weight loss in dealing with one of the most serious and most common health issues related to obesity, the really difficult problem is how to help people with severe obesity not only lose their weight, but also to keep it off over the long term.

The weight loss clinic notes that the UK study dealt with relatively modest amounts of weight loss; moreover, it is still too soon to see how the test subjects will fare in years to come when, almost certainly, a large number will have regained a great deal of the weight they lost. The problem, says the clinic, is that long term weight loss remains elusive for the vast majority of people with serious weight problems – and for many with less serious problems. Indeed, for severely obese individuals, who in some cases may have as much as 100 or more pounds to lose, the struggle can often seem almost pointless, and statistics offer very little solace, says the clinic.

The reason for the dire statistics on efforts to defeat obesity has very little to do with the character of people struggling with the issue, and almost everything to do with human physiology, says Dr. Feiz & Associates. The problem is that the human body appears to be designed to maintain an individual’s weight, whatever that weight may be. This is largely the result of hormones such as ghrelin, which induce feelings that are very difficult to distinguish from actual hunger. Even worse, the clinic notes, the production of ghrelin actually increases as we lose weight, making it progressively more difficult to achieve and maintain a weight loss.

Dr. Feiz & Associates notes that the good news is that bariatric surgeries such as the sleeve gastrectomy actually cause a drastic reduction in the body’s production of ghrelin by removing a large portion of the stomach, including an area where the hormone is manufactured. The clinic notes that the combination of a smaller stomach making overeating very uncomfortable, combined with the dramatic reduction in the pangs of appetite that sabotages so many weight loss efforts, makes weight loss achievable – though it is never easy.

Readers who would like to learn how a combination of a commitment to changing eating habits and weight loss surgery can actually help them defeat severe obesity are invited to contact Dr. Feiz & Associates at (800) 868-5946 or via its site at http://www.drfeiz.com/.