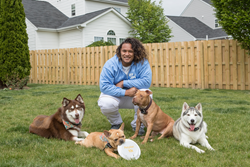 “To be named the Pet Parent of the Year at this year’s Vet Awards is really special, and I’m excited to take part in the event,”says Shelton.

Petplan pet insurance has named pro football star Danny Shelton as their “Pet Parent of the Year” for the 2018 Veterinary Excellence Awards. Shelton, who has four rescued dogs, distinguished himself among this year’s candidates through his public advocacy of pet health, hands-on work in the community and commitment to providing relief aid to pets affected by Hurricanes Harvey and Irma.

“Danny Shelton is not only a role model on the field, he’s a model pet parent to boot,” says Natasha Ashton, co-founder and co-CEO of Petplan. “One peek at his @the_furry_sheltons Instagram account makes his love for his dogs and commitment to their wellbeing apparent. But beyond treating his own pets like gold, Danny has gone above and beyond in helping other pets live better, too.”

At Christmastime, the defensive lineman plays Santa Paws at Cleveland-area shelters, distributing much-needed food and supplies — many of which he donates himself.

And when hurricanes devastated communities in the Gulf Coast last summer, the 2015 first-round pick out of the University of Washington partnered with Petplan to make a $55,000 donation to pet organizations for hurricane relief.

“Danny’s a big guy with an even bigger heart, and we can’t wait to recognize his efforts at the 2018 Veterinary Excellence Awards,” added Ashton.

Shelton is honored to be recognized at the event.

“Since I adopted my first dog in college— my Pit Bull, Moni — pets have become a huge part of my life,” says Shelton. “Moni, Mojo, Juicy and Juju are like family to me and [fiancée] Mara, and giving back is our way of honoring them and all the love they’ve brought to our lives. To be named the Pet Parent of the Year at this year’s Vet Awards is really special, and I’m excited to take part in the event.”

Shelton will receive his award at the Petplan Veterinary Excellence Awards on February 2 at the Four Seasons Resort Orlando. The ceremony is a black-tie gala and dinner that celebrates the achievements of outstanding veterinary professionals and one exemplary pet parent.

ABOUT PETPLAN
Petplan has built an industry-leading pet insurance policy for pet parents who demand a higher pedigree of care for their best friends. We’ve leveraged 40 years of global experience to create completely customizable coverage pet parents can feel confident in, and world-class claims service that operates 24 hours a day, every day.

Petplan’s innovative approach to pet insurance has been recognized by Forbes, Financial Times, Bloomberg, Inc. magazine, Smart CEO, the Communicator Awards, Ernst & Young and many others.