Novato and Sonoma-based SolarCraft, a leader in solar and clean energy system design and installation, has appointed Ted Walsh to serve as Chief Executive Officer. 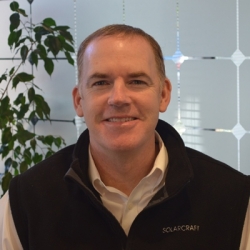 Novato, CA, November 30, 2017 — Mr. Walsh, who formerly served as Vice President of Sales & Marketing at SolarCraft, takes the helm to guide the company’s strategic direction and fulfil the company’s mission of delivering the highest value solar and clean energy solutions. “Ted has done many impressive things in our industry over the last decade, and helped to grow local solar adoption to one of the most respected levels in the country,” Bill Stewart said. Stewart, SolarCraft’s Founder, former CEO and current Board Member continued: “Ted is committed to teamwork and holds a deep respect for our clients, partners and employees. We are excited to have Ted lead SolarCraft, and excited for the future as the company expands our technology and service offerings.”

Mr. Walsh has been a leader in the solar industry for more than 10 years, and has led several local solar companies to their most stable growth periods. Throughout his career, Ted’s local work in renewable energy has gained national recognition. In 2007, he executed the GoSolarMarin program, at the time representing the largest community purchase of home solar systems in the country. Successful programs GoSolarSonoma and GoSolarNapa soon followed, along with the development of hundreds of residential and commercial solar projects within the North Bay community. Significant projects include the deployment of the first two commercial-scale floating solar systems in the world for wineries in Sonoma and Napa Counties, the development of the country’s first solar-powered multiplex theater in Fairfax, as well as helping many of the Bay Area’s leading organizations transition to solar power, including Apple, eBay, Sutter Health, Jackson Family Wines, Gallo, Friedman’s Home Improvement, The Marin Mammal Center and many more. Mr. Walsh also gained recognition for his local client’s commitments to renewable energy from the Obama White House.

Prior to joining SolarCraft, Ted was President of Stellar Energy, a national commercial-scale solar provider based in Sonoma County, where he led their growth and eventual acquisition by the nation’s largest utility. Previously, Ted worked at Marin-based SPG Solar for six years, serving as VP of Sales & Marketing and contributing to the company becoming one of California’s leading residential and commercial solar providers before eventually being acquired by the world’s largest solar company.

Joining the SolarCraft team in February of 2017, Ted brings his passion for environmental leadership and local sustainability with his expertise and experience in renewable energy to SolarCraft. Ted combines a high level of integrity, customer perspective and personnel management experience with expertise in local energy markets, energy technology, and project finance. He believes that SolarCraft possesses the ideal balance of commitment to community, “client-first” company culture, technical expertise and partnerships to best serve the Northern California market.

“Solar makes a difference, short and long term, locally and globally,” says Walsh, who has lived and worked in the North Bay for more than a decade. “SolarCraft energy solutions save clients money, keep that money within the community, and improve environmental health locally. Our North Bay community, and the larger Northern California region, must lead the way on environmental and economic responsibility. As a community, we can set an example that the rest of the state, the rest of the country and the world can follow.”

Mr. Walsh holds degrees in Economics, Managerial Accounting, and Chemistry from the University of Rochester, NY and the University of South Florida, respectively. A lifelong athlete, he competed in the decathlon and basketball in college and played professional basketball in Europe. He continues to coach youth sports locally, volunteers for local community and sustainability programs, and lives in Marin County with his wife and two young children in a solar-powered, environmentally low-impact home.

SolarCraft delivers Solar and Clean Energy Solutions for homes in the North Bay and businesses and non-profit organizations throughout Northern California. SolarCraft provides the most advanced solar technology with expert in-house design/build services, all back by comprehensive warranties supported by 34 years of local experience and dedicated service and maintenance teams. SolarCraft is 100% Employee-Owned and is proud to be one of the largest green-tech employers in the area. We are a certified Green Business, a Pacific Sun “Best in Marin” Hall of Fame member, and consistently ranked as one of the best places to work by the North Bay Business Journal. Our team of dedicated employee-partners is proud to have installed more solar energy systems than any other company based in the North Bay, including many of our community’s most recognizable organizations. We invite you to learn more about SolarCraft and the economic and environmental benefits of solar at www.solarcraft.com