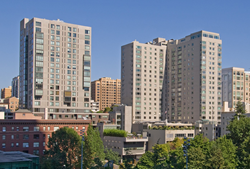 Horizon was extremely pleased with the result of the financing. We could have not asked for a better outcome or more smoothly run process. There is simply no way this transaction could have occurred let alone with such a positive outcome without Ziegler’s leadership and reputation in the market.

Ziegler, a specialty investment bank, is pleased to announce the successful closing of the Horizon House Project $75,000,000 Series 2017 Bonds.

Horizon House, is a Washington nonprofit corporation and 501(c)(3) organization that was established in 1961 to develop, own and operate senior living communities. Today, Horizon House owns and operates a continuing care retirement community adjacent to the downtown core of Seattle, offering 378 independent living apartments, 80 supported living (i.e., assisted living) apartments and 25 dementia care supported living apartments, to its more than 540 residents. Horizon House is affiliated with the Pacific Northwest Conference of the United Church of Christ.

Horizon House will use the proceeds of the Bonds, together with certain other moneys, to: (i) refund all of the $45,400,000 outstanding Series 2014A Bonds and refund all of the $11,100,000 outstanding Series 2014B Bonds; (ii) pay or reimburse the Borrower for the costs of the remodeling, renovation and equipping of the Borrower’s continuing care retirement community; (iii) pay fees resulting from the termination of certain interest rate hedge agreements; and (iv) pay certain costs of issuance of the Bonds. Ziegler assisted Horizon House in achieving a first-time rating on the Bonds of “BBB+” from Fitch. The Series 2017 Bonds are comprised of $75,000,000 in serial and term bonds which amortize through January 1, 2048.

“Horizon was extremely pleased with the result of the financing,” Chief Financial Officer for Horizon House, Mike Ostem, noted. “We could have not asked for a better outcome or more smoothly run process. There is simply no way this transaction could have occurred let alone with such a positive outcome without Ziegler’s leadership and reputation in the market.”

“We have long-respected the good work Horizon House is doing in downtown Seattle, and we are very pleased to help them take the next steps in growing their mission,” added Mary Muñoz, Managing Director in Ziegler’s senior living practice. “Having earned a very strong ‘BBB+’ rating from Fitch, Horizon House was able to capture very strong fixed interest rates in a highly competitive December market that was further charged by pending tax reform.”

Said Sarkis Garabedian, Director in Ziegler’s senior living practice, “It was an absolute privilege to work with the Horizon House team on this issue, one that has been considered off and on for several years before being spurred on due to the looming uncertainty of the tax bill. We worked closely together with Horizon House and the finance team under a tight, six-week timeframe from kickoff to closing of the financing. While the tax bill may have served as a catalyst for this issue, we set out with clear goals that I am thrilled we were able to deliver for the benefit of Horizon House, including a BBB+ bond rating, no debt service reserve fund to maximize project proceeds and cost of capital in the low 4% range on a yield to maturity basis.”

For further information on the structure and use of this issue, please see the Official Statement located on the Electronic Municipal Market Access system's Document Archive.

For more information about Ziegler, please visit us at http://www.Ziegler.com.

About Ziegler:
Ziegler is a privately held investment bank, capital markets and proprietary investments firm. Specializing in the healthcare, senior living and education sectors, as well as general municipal and structured finance, enables Ziegler to generate a positive impact on the clients and communities it serves. Headquartered in Chicago with regional and branch offices throughout the United States, Ziegler provides its clients with capital raising, strategic advisory services, equity and fixed income sales & trading and research. To learn more, visit http://www.ziegler.com.

Certain comments in this news release represent forward-looking statements made pursuant to the provisions of the Private Securities Litigation Reform Act of 1995. This client’s experience may not be representative of the experience of other clients, nor is it indicative of future performance or success. The forward-looking statements are subject to a number of risks and uncertainties, in particular, the overall financial health of the securities industry, the strength of the healthcare sector of the U.S. economy and the municipal securities marketplace, the ability of the Company to underwrite and distribute securities, the market value of mutual fund portfolios and separate account portfolios advised by the Company, the volume of sales by its retail brokers, the outcome of pending litigation, and the ability to attract and retain qualified employees.