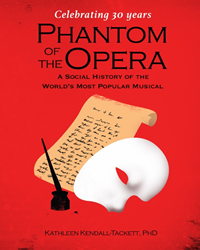 Phantom of the Opera: A Social History of the World's Most Popular Musical

“I first became interested in this story after seeing the movie version of Phantom. I was intrigued, but knew nothing about the production or any of the actors. When I went online, I was stunned to find huge controversy about the film that went on for years. I wanted to write the book then as I was fascinated by all these characters, but I just couldn't do it at the time. I'm so glad I waited for the controversy around the film paled in comparison to the controversy around the Phantom sequel. Twelve people with a Facebook page challenged Andrew Lloyd Webber, a man with unlimited financial resources. It was amazing. I knew then that I needed to tell this story. Phantom of the Opera has been more successful than any other piece of entertainment in history. I wanted to tell the stories of the people behind it. It's a fascinating tale.”

Kathleen Kendall-Tackett, PhD, is a health psychologist and author who has won many awards for her research. She wrote this book because she could never resist a good story. Phantom of the Opera: A Social History of the World’s Most Popular Musical is her 35th book. Dr. Kendall-Tackett is a Clinical Associate Professor at Texas Tech University School of Medicine and lives in Amarillo, Texas.

Phantom of the Opera: A Social History of the World’s Most Popular Musical is available on Amazon or at http://www.PraeclarusPress.com.