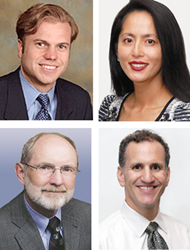 Sonoma Magazine’s Top Doctor Survey was submitted to Sonoma County doctors who were then asked which medical specialist they would most often recommend to a loved one, and more than 300 professionals emerged as top docs in 50 categories of medicine. “The Santa Rosa Head & Neck team of physicians who have been selected for this honor are very happy to be included among such an elite group of physicians,” said Dr. David Quenelle M.D. “This is a rare opportunity and we are pleased to step forward and share information about the work we do.”

Santa Rosa Head and Neck Surgical Group (SRHN) offers expertise in the medical and surgical treatment of patients with a wide variety of disorders of the head and neck including hearing and balance problems, nasal/sinus disease, snoring, voice disorders, and swallowing problems. SRHN physicians also have expertise in the management of cancers of the nose, mouth, throat, neck, facial skin, and thyroid and have also been extensively trained in cosmetic and reconstructive procedures of the face and neck.

Dr. Mark Homicz graduated from Yale Medical School in 1998. He conducted his internship training in General Surgery at Stanford University. He completed a residency in Otolaryngology/Head & Neck Surgery at the University of California, San Diego. His training included an intensive focus on head and neck cancer and thyroid/parathyroid surgery. Dr. Homicz received national awards from the American Academy of Otolaryngology/Head & Neck Surgery, American Academy of Facial Plastic Surgery, and the Triologic Society for academic achievement and research during his training.

Dr. Huang graduated from University of Illinois College of Medicine in 1998 as a member of the James Scholar Program. was awarded the McGraw-Hill Book Award for top-ranked medical student in basic sciences, and was elected to the Alpha Omega Alpha medical honor society. As an undergraduate, she received the Howard Hughes research award, and was twice the recipient of the Foundation for Advanced Education in the Sciences Summer Research Grant from the National Institutes of Health. She pursued a research internship at the Lawrence Berkeley National Laboratory, received the Biomedicine Training Investigator Award, and the NIH National Research Service Award.

Dr. Huang completed her internship in General Surgery, residency in Otolaryngology/Head and Neck Surgery, and fellowship in Facial Plastic and Cosmetic Surgery at The University of Chicago Hospitals. She is board certified by the American Academy of Otolaryngology/Head and Neck Surgery. Her various achievements have been featured on the Discovery Channel, VH-1, American Medical Association News, and the Chicago Sun Times. Dr. Huang is among a handful of female surgeons trained in both head/neck and facial plastic surgery.

Santa Rosa Head & NeckDr. David Quenelle attended college and medical school at the University of Oregon. After internship in San Diego and surgery training in Fresno, he completed his Otolaryngology residency at University of Cincinnati and board certification in 1974. He was a consultant in Cape Town, South Africa for a year, then did a fellowship in Head & Neck Surgery in Cincinnati. He stayed on the faculty as Chief of the Division of Head & Neck Surgery for 3 years and was a senior investigator at the National Cancer Institute.

From 1969 to 1971, Dr. Quenelle was a US Air Force Flight Surgeon in Southeast Asia and earned the Air Medal and a Letter of Commendation. He entered private practice in Santa Rosa in 1979 but continues to teach as a clinical professor at UCSF once per month. Dr. Quenelle enjoys practicing all aspects of modern ENT – Ear, Nose, Throat, and Head & Neck surgery.
About Stefan M. Zechowy M.D.

Dr. Stefan Zechowy graduated from Cornell University with a degree in Computer Science. After a year as a software engineer in Massachusetts he attended medical school. He graduated from University of Maryland School of Medicine in 1996 and then completed his internship and residency in Otolaryngology/Head and Neck Surgery at Tufts University in Boston. His pediatric otolaryngology training was done at Harvard’s Children’s Hospital. His residency also included a year at Brown University’s Rhode Island Hospital with a focus on facial trauma and reconstruction, as well as pediatric otolaryngology training at Hasbro Children’s Hospital.

Dr. Zechowy moved to Santa Rosa and joined Santa Rosa Head and Neck Surgical Group in 2001. He is a board-certified otolaryngologist and enjoys and practices all aspects of otolaryngology (ENT – Ear, Nose, Throat and Head & Neck Surgery). His areas of special interest and expertise include nasal and sinus surgery, ear surgery, sleep apnea surgery, as well as thyroid surgery.