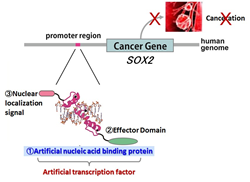 The artificial transcription factor (ATF) created by Professor Sera and colleagues is capable of suppressing the expression of SOX2 protein, an oncogene associated with both lung and esophageal cancer

Researchers at Okayama University describe in Oncotarget an approach for suppressing the expression of the SOX2 protein, an oncogene associated with both lung and esophageal cancer. The procedure, based on the targeted delivery of a specially designed artificial protein, may signify an important step towards new cancer therapies.

Most cancer-related deaths world-wide are caused by lung cancer. For one type of lung cancer, lung squamous cell carcinoma (SCC), a protein called SOX2 is known to be a candidate oncogene — a gene that, under certain conditions, can transform a cell into a tumorous cell. A team of researchers led by Professor Takashi Sera from Okayama University has now found a method for suppressing SOX2 expression in cancer cells. The scientists’ approach involves a so-called artificial transcription factor (ATF) — a protein that regulates the production of a gene — and may lead to an effective therapy for not only lung SCC but also esophageal SCC.

The ATF created by Professor Sera and colleagues acting as a SOX2 suppressor is based on ‘zinc finger’ structures: protein motifs featuring stabilizing zinc ions. The researchers first showed that introduction of their ATF compound (labeled ATF/SOX2), consisting of 6 zinc-finger arrays, indeed leads to the suppression of SOX2 expression in vitro. They also confirmed that the ATF did not affect the viability of normal human cells. In a mouse model, ATF/SOX2 inhibited lung SCC tumor growth, confirming the effect of suppression of SOX2 in vivo.

Regarding the prospect of developing an SSC therapy based on ATF/SOX2, the scientists point out that an advantage of using ATFs is their small molecular weight, making it relatively easy to deliver them to target cells. They also note that ATFs can fuse with cell-penetrating peptides, providing a potential mechanism for the actual delivery. Moreover, this protein delivery approach is independent of cell type and there’s no risk of mutagenesis (a change in the genetic information of an organism).

Professor Sera and colleagues conclude that, although certain challenges still have to be overcome, “We have used ATF technology to successfully suppress SCC in vitro and in vivo … as a first step in the search for an effective treatment for SCC lung and esophageal cancers.”

Background
SOX2
Transcription factors are proteins that control how much genetic information is transcribed into messenger-RNA. Their function is to ensure that genes are synthesized (‘expressed’) at the right time and place in the cell, and in the right amount.

SOX2 is such a transcription factor; it plays an essential role in (early) mammalian development and in the maintenance of stem cells (cells that have the ability to differentiate — become cells of a specialized type).
In lung squamous cell carcinoma (SCC), SOX2 becomes overexpressed. Professor Takashi Sera from Okayama University and colleagues have now found an approach for suppressing SOX2 expression.

Zinc Fingers
A zinc finger is a protein structural motif featuring one or more zinc ions. The zinc ions provide stabilization of the local folded protein structure by being a coordination center for surrounding ligands. Artificial transcription factors (ATFs) based on zinc-finger structures can be designed in such a way that they regulate the expression of particular target genes. Takashi Sera and colleagues have now shown that an ATF based on 6 zinc fingers can suppress the expression of SOX2, a protein identified as an oncogene for lung and esophageal squamous cell carcinoma (SCC).

Caption
The artificial transcription factor (ATF) created by Professor Sera and colleagues is capable of suppressing the expression of SOX2 protein, an oncogene associated with both lung and esophageal cancer.

About Okayama University
Okayama University is one of the largest comprehensive universities in Japan with roots going back to the Medical Training Place sponsored by the Lord of Okayama and established in 1870. Now with 1,300 faculty and 13,000 students, the University offers courses in specialties ranging from medicine and pharmacy to humanities and physical sciences.
Okayama University is located in the heart of Japan approximately 3 hours west of Tokyo by Shinkansen.
Website: http://www.okayama-u.ac.jp/index_e.html

FDA Approves BOTOX® Cosmetic (OnabotulinumtoxinA) for the Temporary Improvement in the...