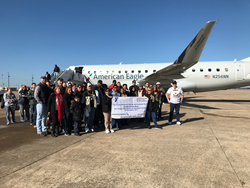 This was a great opportunity to leave their day-to-day worries behind and start celebrating Christmas.

American Airlines partnered with the Armed Services YMCA to fly soldiers to the Lockheed Martin Armed Forces Bowl in Fort Worth, Texas on Saturday, Dec. 23. The organizations sent service members and their families from Fort Leonard Wood, Mo. and Fort Bliss, Texas to the game through Envoy, a wholly owned regional carrier of American and subsidiary of American Airlines Group.

American donated two round trip charter flights for the military community at Fort Bliss and Fort Leonard Wood Army installations. Envoy flew attendees free of charge to and from Dallas/Fort Worth.

Limited time off and tight finances around the holidays makes it difficult for service members to travel. These no-cost flights from American Airlines made it possible for soldiers and their families to spend a day away from base. A trip to the Armed Forces Bowl was a very special gift for the entire family.

Each year the Armed Services YMCA works with Lockheed Martin, official sponsor of the Armed Forces Bowl to transport service members to and from the game via bus from Altus, Lawton and Killeen, Texas. The additional charter planes provided by American and Envoy allowed more members of the military community to enjoy the bowl game.

“This was a great opportunity to leave their day-to-day worries behind and start celebrating Christmas,” said William French, President & CEO of ASYMCA. “We’re grateful American Airlines made it possible for them to enjoy the Armed Forces Bowl.”

American Airlines and American Eagle offer an average of nearly 6,700 flights per day to nearly 350 destinations in more than 50 countries. American has hubs in Charlotte, Chicago, Dallas/Fort Worth, Los Angeles, Miami, New York, Philadelphia, Phoenix, and Washington, D.C. American is a founding member of the oneworld alliance, whose members and members-elect serve nearly 1,000 destinations with 14,250 daily flights to 150 countries. Shares of American Airlines Group Inc. trade on Nasdaq under the ticker symbol AAL. In 2015, its stock joined the S&P 500 index. Connect with American on Twitter @AmericanAir and at Facebook.com/AmericanAirlines.

Rebecca Zamolo invites hackers to destroy her house in a A New Clue Mystery Game In Real Life!