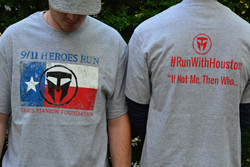 These individuals exemplify the strength of America’s national character, by selflessly putting the needs of others before themselves, and representing what it means to live by ‘If Not Me, Then Who…’ “

“It is always an honor to recognize our local heroes and their families on November 11th – every year it’s such a source of inspiration and patriotic pride,” said Mayor Sylvester Turner. “We are especially proud to welcome the Travis Manion Foundation and their 9/11 Heroes Run to downtown Houston to raise funds for the Hurricane Harvey Relief Fund and help our citizens in need of assistance.”

The celebration will begin at 8 a.m. with the nationally recognized Travis Manion Foundation 9/11 Heroes Run, originally scheduled for September 9, 2017. The salute continues with the AARP Veterans Job & Resource Fair starting at 8 a.m., lasting until 12 p.m. in Hermann Square at City Hall.

“The City of Houston continues to make it a priority to help these men and women resume a productive civilian life following their service to our great nation. Through our corporate partners AARP and H-E-B, we are able to provide these service members with promising opportunities to join Houston’s work force and access resources that will be beneficial,” said Mayor Turner.

The H-E-B Commemorative Ceremony will be held on the steps of City Hall at 10:00 a.m., ending with a Moment of Silence at 11 a.m. in memory of the WWI signing of the Armistice. Don Nelson, retired military and formerly with ABC, will emcee the ceremony.

In addition, Mayor Turner will issue an official proclamation announcing November 11, 2017, as “If Not Me, Then Who…” Day: A recognition of those who stepped forward in the wake of Hurricane Harvey and an echo of the words Marine 1st LT Travis Manion said before his final deployment to Iraq in 2007. These words have become the Travis Manion Foundation’s official mantra and part of a national call to service inspiring hundreds of thousands who have participated in Travis Manion Foundation events in communities across America.

The Travis Manion Foundation (TMF), one of the nation’s leading veteran advocacy organizations, has been assisting the Houston community in recovery efforts, by uniting veterans, first responders, and inspired civilians to help those still in need. TMF is dedicating the proceeds from this year’s Houston 9/11 Heroes Run to support relief efforts in the city, which also includes funding for a TMF Service Expedition.

To further support Houston’s recovery efforts, TMF has collected donations for hurricane relief and flown Texas flags at every 9/11 Heroes Run across the country in September. These flags will be on display at the Houston 9/11 Heroes Run. TMF is offering the option to support Houston recovery efforts by purchasing a “Run with Houston” limited edition t-shirt. Sales support the Hurricane Harvey Relief Fund. Those who purchase a shirt will be encouraged to run in their own community on November 11th and “virtually” run with Houston. The shirt can be purchased online at http://www.travismanion.org/runwithhouston, and will also be available at the Houston 9/11 Heroes Run.

TMF’s 9/11 Heroes Run 5K series is annually hosted in more than 50 domestic and international locations. These runs unite more than 50,000 participants to honor the sacrifices of our veterans, active duty military, first responders, and civilians who were affected by the attacks on 9/11 and in the wars since.

“We are grateful to the Houston community for hosting our largest 9/11 Heroes Run in the country the past several years, and we are proud to give back to the city during its greatest time of need,” said Ryan Manion, TMF President. “I am inspired by all those who have served the Houston community in the wake of the storm, and their willingness to help all those in need, similar to how so many Americans stepped forward following the tragic events of 9/11. These individuals exemplify the strength of America’s national character, by selflessly putting the needs of others before themselves, and representing what it means to live by ‘If Not Me, Then Who…’”

The U.S. Department of Veterans Affairs credits Houston with being home to more than 200,000 military veterans, 300,000 of whom are living in the metropolitan area. Our community is comprised of veterans of WWII, the wars in Iraq & Afghanistan, and every conflict and peacetime era in between. In 2013, USAA and the U.S. Chamber of Commerce Foundation’s Hiring Our Heroes named Houston as the number one city in the United States for veterans, because of the city’s strong economy, affordability and plentiful resources for former service members. Houston also has one of the largest national sources of young men and women who join the military and one of the largest destination cities for exiting military members.

Travis Manion Foundation (TMF) empowers veterans and families of fallen heroes to develop character in future generations. In 2007, 1stLt Travis Manion (USMC) was killed in Iraq while saving his wounded teammates. Today, Travis’ legacy lives on in the words he spoke before leaving for his final deployment, “If Not Me, Then Who…” Guided by this mantra, veterans continue their service, develop strong relationships with their communities, and thrive in their post-military lives. As a result, communities prosper and the character of our nation’s heroes lives on in the next generation. The story of 1st Lt. Travis Manion and his Naval Academy brother Lt. (SEAL) Brendan Looney have been publicized in the book Brothers Forever, and additional information about the Foundation can be found at http://www.travismanion.org.

H-E-B, with sales of more than $23 billion, operates more than 380 stores in Texas and Mexico. Known for its innovation and community service, H-E-B celebrated its 110th anniversary in 2015. Recognized for its fresh food, quality products, convenient services, and a commitment to environmental responsibility and sustainability, H-E-B strives to provide the best customer experience at everyday low prices. Based in San Antonio, H-E-B employs more than 100,000 Partners in Texas and Mexico and serves millions of customers in more than 300 communities. For more information, visit heb.com.

AARP is the nation’s largest nonprofit, nonpartisan organization dedicated to empowering Americans 50 and older to choose how they live as they age. With nearly 38 million members and offices in every state, the District of Columbia, Puerto Rico, and the U.S. Virgin Islands, AARP works to strengthen communities and advocate for what matters most to families with a focus on health security, financial stability and personal fulfillment. Get to know us at aarp.org/Houston