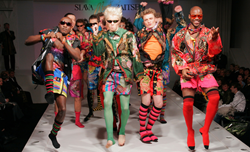 Fashions can be strange enough to scare off consumers, but controversial positions can scare off clothes makers.

Niche marketing and the trend towards people of different belief systems becoming geographically separated, has made it easier for manufacturers to take sides on controversial issues.

A December 13 article in The Independent reports on a list of the most frequently used words in over 30,000 fashion and lifestyle publications. The list for 2017 included such politically and socially loaded words as “millennial,” “cult,” “vegan,” “power,” and “woke.” The article goes on to discuss that, while some fairly anodyne fashion related words, such as “floral” made the list, there has been a definite increase in products that take a stand on such causes as feminism and the environment. Hi-Tech Printing & Labeling Inc., a Los Angeles manufacturer of fabric labels and tags for clothing and other items, says that niche marketing and the trend towards people of different belief systems becoming geographically separated, has made it easier for manufacturers to take sides on controversial issues, get their products in front of the appropriate group of consumers, and then advertise their stance on their products in a number of ways.

Hi Tech Printing & Labeling Inc. notes that, in the past, the conventional wisdom at all kinds of commercial concerns was that it was a very bad idea to take any side in a matter that even touched on political or religious matters. The belief was that taking any stance relating to a controversial topic risked alienating a large percentage of the population. However, the manufacturer points out that taking a position can also endear you to a large part of the population. The manufacturer points out that it’s therefore no wonder that, in this time of cultural fragmentation and highly targeted marketing, that more and fashion manufacturers are betting that bonding more strongly with one side of an argument will garner them many more customers than it will lose.

The use of fabric labels and hang tags to take a side on a topic such as feminism or global warming can be a powerful way to grab a buyer’s attention, says Hi-Tech Printing & Labeling Inc. While most people tend to think of labels as strictly a means of communicating about such matters as logos and providing information washing instructions and the composition of a garment, they can also provide slogans and other material that can hint at, or state outright, a designer or manufacturer’s stance on a wide variety of matters. The manufacturer adds that larger hang tags can provide both eye-catching designs and more detailed written material about how the clothes reflect the cause that the maker endorses. Finally, it notes that this kind of marketing is not limited to one side or another of the political aisle, it’s just a matter of making sure that the right fashion audiences is being addressed, says the manufacturer.

Readers, in or outside of the fashion business, who would like to learn more about how Hi-Tech Printing & Labeling Inc. can help them communicate their commitment to a causes and attract more loyal customers can call the firm at (213) 746-7772. They can visit its web site at http://www.FabricLabels.com.