BUDAPEST, Hungary, Dec. 29, 2017 — We are living in the decade of bullish markets. Because of record returns (and low interest rates) retail money floods the market. What could next year hold for the investors after all this? Innovative Securities' prognosis tries to answer. 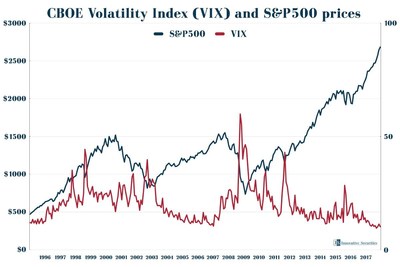 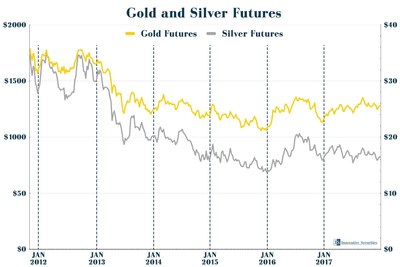 In 2017, the already expensive stocks (and other instruments) became even more expensive, reminds Innovative Securities, adding: tech giants were the leaders. The company also mentions that according to some valuation models, S&P 500 was not higher since 1929 and 1999-2000. The globally low interest rates are even more obvious in the light of the conjunction that is at a 10-year high.

Some instruments' futures volatility is at all-time low, which shows that investors aren't worried about risks. When investors are this optimistic, markets can become overpriced. This does not mean bullish markets cannot go on for another year, but when CBOE Volatility Index goes this low, corrections usually come, says Innovative Securities, adding: this is the reason why a correction up to 10% may happen in the first or second quarter of 2018.

Other instruments worth watching are silver and gold. For almost a decade now, precious metals perform weak in November and December, and make a reversal that lasts in the first quarter of the next year. This phenomenon became more obvious in 2015 and 2016: when the FED hiked the interest rate, gold and silver started to rise. This happened this year, too. Of course, it influences the USD just as well, and the greenback may have a weaker first semester, believes the company. According to historic valuation models, mining and energy sector is undervalued, so a rise is probable in their cases as well.

Monetary policies may change too, adds Innovative Securities. The FED will have a new leader in February that can cause a turn of events. The currently low, but awakening inflation could be in focus in 2018. We still don't know if western central banks will hike rates at last, or not, says the prognosis, mentioning that ECB will also slow down its QE programme.

There are political questions as well: Donald Trump's impeachment is still a possibility, although it's hard to say how high it is. The mid-term elections will be important for the Republicans next year, and the results may decide Trump's fate, writes the company, adding: this may influence stock markets.

2018 will be an important year for Bitcoin. The rise it had may be hard to reproduce. Even harder seeing how authorities around the world trying to regulate this market. If the fears of the cryptocurrency bubble are true, next year may bring a correction, believes Innovative Securities, adding: Christmas season showed again how volatile Bitcoin is.

The prognosis concludes that caution and lower risk taking might be advised next year, since – as Kevin Warsh former governor of FED puts it – “macroeconomic risk may be the highest when market measures of volatility are lowest”.

The Misconceptions of Being a CEO

The Misconceptions of Being a CEO