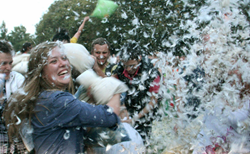 Team Members taking part in one of The DASH's “Action Items”

“With so many emotionally challenging things happening around the world in 2017, I wanted to create a playful event at the end of the year designed to help people simply let loose and have a little fun,”

Based on university research suggesting the benefits of adult play, startup company The DASH (Dangerous Awesome Scavenger Hunt) will hold its first 3-hour National Race on December 31, 2017. As an event to help people of all ages start the new year in a joyful mood, teams made of 2-5 people will be challenged to complete against other teams around the country by accomplishing physical feats, ridiculous tasks, and just plain hilarious challenges.

“With so many emotionally challenging things happening around the world in 2017, I wanted to create a playful event at the end of the year designed to help people simply let loose and have a little fun,” said Danny Ruderman, CEO of The DASH.

Ruderman came up with the idea after having attended Stanford University where he majored in human biology and took part in an infamous event called “The Game,” a 24 hour scavenger hunt involving students and faculty. Ruderman had studied the effects of play on the nervous system while in college and after experiencing how much fun he and his friends had together right before finals, he pledged that one day he would find a way to bring a similar concept to others.

Ruderman may be on to something. According to a study conducted at the University of Illinois at Urbana-Champaign, Professor Lynn Barnett found that playfulness helped adults adapt to stressful situations by giving them specific coping mechanisms in the brain. This is probably no surprise to anyone who has recently played kickball or a rousing game of charades.

What finally helped Ruderman make his goal a reality, however, was the creation of Instagram Stories. “I realized that I suddenly had a platform that would allow thousands of teams to be able to play a game simultaneously,” stated the founder.

At 11 am PST (2pm EST), The DASH will use its Instagram account to post a series of “Action Items” to teams who have registered to play. Examples might include having a team get everyone in a restaurant to raise his/her hands, find an AOL CD from the 1990s, make a Jack-o-lantern of a tomato, or have a pillow fight among team members in a public place. Each action item is assigned a certain number of points, and each team documents the action by taking videos and posting them to a team member's Instagram Story. Back at The DASH HQ, “tally experts” are following these stories and keeping track of points in real time so that teams know where they stand throughout the race. The winning team will get bragging rights, T-shirts, and the opportunity to choose a charity to which the DASH will donate $1000.

“The DASH is for everyone,” said Ruderman, “young, old, middle-aged, families, friends, fraternities, co-workers, cat lovers, chess players, race car drivers, or anyone who just wants to have some clean fun on the last day of the year. You'll even be done in time to go out for New Year's. You just might have to change your sticky clothes first.”

For more information and to learn about future events visit http://www.thedash2018.com

The Township of Colerain, OH. selects OpenGov to modernize and streamline permitting, licencing and code enforcement

The exponential growth of a fixed-time trading platform by integrating blockchain...

SmartSites Is The #1 Ecommerce Development Company On Find Best Web...

The Township of Colerain, OH. selects OpenGov to modernize and streamline...