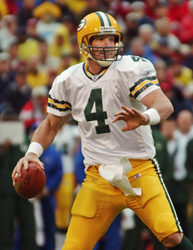 It's an honor to have these three athletes inducted into the East-West Shrine Game Hall of Fame.

The 2018 East-West Shrine Game will be played on Jan. 20 at Tropicana Field in St. Petersburg, Florida. The Hall of Fame induction ceremony will take place the prior evening at the Players/Hall of Fame Banquet.

The three inductees include two quarterbacks from Mississippi (whose similarities pretty much end there) and a “Nasty” offensive tackle. Two are members of the Pro Football Hall of Fame and all three have resumes that are hard to match.

Brett Favre, a native of Gulfport, Mississippi, and a member of the Pro Football Hall of Fame, still owns more than 170 NFL records nearly a decade after he last retired. His streaks of 297 straight regular season starts and 321 including playoff games, span 19 years and three teams (Green Bay Packers, New York Jets and Minnesota Vikings.) Favre appeared in East West Shrine Game No. 66 in Stanford, California in 1991 and was selected as one of that contest’s Most Outstanding Players.

Gary Huff – another quarterback and Mississippi native (Natchez) – is still well represented in his alma mater’s record books 45 years later. He shares Florida State University’s record for touchdowns in a game (6) and is still in the top 10 among Seminole signal-callers in career yardage and completions. He will be forever linked to the Tampa Bay area because he was the quarterback for the Buccaneers first victory in 1977 (He also attended Leto High in Tampa). Huff played in East-West Shrine Game No. 48 in San Francisco’s Candlestick Park in 1972.

Willie “Nasty” Roaf, a Pro Football Hall of Fame member from Pine Bluff, Arkansas, was a standout playing a position that is often only recognized when a penalty is called. Emerging as a force at Louisiana Tech, he later racked up a decade of Pro Bowls and a pair of NFLPA Offensive Lineman of the Year awards playing for the New Orleans Saints and Kansas City Chiefs. Roaf was recognized as a member of the NFL’s All-Decade team for both the 1990s and 2000s. Roaf played in East-West Shrine Game No. 68 in Stanford, California in 1993.

The three inductees have wildly different experiences off the field of play. Alll three gave back as coaches before moving on to other ventures (Favre at Oak Hill High School in Mississippi; Roaf at Santa Monica College in California; Huff at Indiana University, University of Kansas, the USFL Memphis Showboats and NFL Houston Oilers).

Huff’s business career started before his playing days ended, with him spending off seasons as a CPA in Tampa. After his playing and coaching days, he led a large cell phone company and the largest IBM equipment seller in the world. He also applied his business acumen to the world of sports, serving as the CFO of the Oakland Raiders and later an associate athletic director at Florida State University (where he is currently the associate director of business services.) Huff is the only person to play, coach and work in administration of both college and professional sports.

About the East-West Shrine Game
Originating in 1925, the East-West Shrine Game is the longest-running college all-star football game in the country and features some of the highest-rated players in the projected NFL draft ranking. While the teams are divided by East and West, the players come together for the beneficiary of the event, Shriners Hospitals for Children. Learn more at http://www.shrinegame.com.