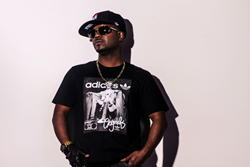 With an encyclopedic knowledge of all forms of hip-hop and rap, Parrish Tha Great is able to draw on all corners of the genre when it comes time to write his music.

An unexpected move can turn your life upside down, but for rapper Parrish Tha Great, it was life-changing in the best possible way. A native of the Midwest, his job transferred him to Dallas, Texas, where he found that “the love was overwhelming so I just stayed.” He’s been rapping since he was a kid, and feels that music is the path that chose him.

With an encyclopedic knowledge of all forms of hip-hop and rap, Parrish Tha Great is able to draw on all corners of the genre when it comes time to write his music. Everything he writes comes from the heart, and he hopes his music can connect with people through what he calls “the purest kind of energy.”

Parrish Tha Great’s latest musical effort is “Get Rich”. The video begins with him rolling up in a sexy sports car; dressed to the nines, he steps out and leads his lady inside. He heads in to a conference room for a meeting where things get heated. From there it’s on to an all-out party, where the drinks keep flowing and the dance moves keep on coming as he celebrates feeling “rich.”

From the music he makes to the logos he uses and merchandise printed, everything Parrish Tha Great creates is a part of him. It comes as no surprise, then, that along with the “Get Rich” music video, he’s designed four t-shirts with the slogan “I Am Rich”, which are seen in the video. The shirts take influence from Versace, Gucci, Run DMC, and MasterCard graphics, and with all designs available on both black and white shirts, there’s something for everyone.